You are here: Home / _Expired / Barleans Class Action Settlement, Claim $35 with No Receipts!
May contain affiliate links. Read disclosure.. Offers were valid at the time of posting, but could expire at any time. All Pictures are for illustration purpose only. Actual product may vary.
Share Share Follow Share Follow View Email 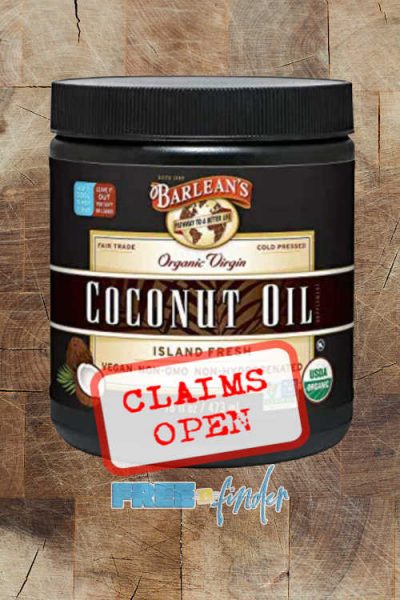 Overview hide
1 Barleans Class Action Settlement, Claim $35 with No Receipts!
1.1 How do I file a claim?
1.2 What’s this settlement about?
1.3 What Products are Included?
1.4 Who is eligible for a refund?
1.5 Is a receipt required?
1.6 How much will I get back?
1.6.1 Without a receipt:
1.6.2 With a receipt:
1.7 What’s the deadline to file a claim?
1.8 What is a class action lawsuit settlement?
1.9 Want more like this?
1.10 Don’t miss another freebie! Get Instant Freebie Alerts here! Find the Newest Freebies posts here! Then, JOIN all of our FB Groups!

If you purchased certain Barlean’s Coconut Oils in the timeframe indicated, then you may be entitled to a cash payment. Because, the lawsuit alleges that Barleans violated certain laws by misleadingly marketing the Products as healthy. Barlean’s denies the allegations and any wrongdoing. A proposed Settlement has been reached in a class action lawsuit known as Testone et al. v. Barlean’s Organic Oils, LLC, Case No. 3:19-cv-00169-RBM-BGS, pending in U.S. District Court in the Southern District of California.

The lawsuit claims that Barlean’s, which marketed and sold the Barlean’s Organic Virgin Coconut Oil, Organic Culinary/Gourmet Coconut Oil, and Organic Butter Flavored Coconut Oil (collectively, the “Coconut Oil Products” or “Products”) violated certain California, New York, and federal laws by misleadingly marketing the Products as healthy. Barlean’s denies the allegations and any wrongdoing. However, to avoid the cost of litigation, and potential risks for both sides, the parties have reached a Class Action Settlement Agreement, which was preliminarily approved by the United States District Court for the Southern District of California on November 10, 2022. The two sides disagree on what relief, and how much, could have been won, if any, if the Class won at trial. The Settlement avoids costs and risks to you from continuing the lawsuit, provides relief to affected persons like you, and releases Barlean’s and others from liability for related claims.

What Products are Included?

If you purchased, for personal use an eligible product between January 24, 2015 and November 10, 2022, you may be a member of the Settlement Class.

Eligible Class Members who timely file a claim may receive between $3.00 to $7.00, per unit, depending on the size of the product, for up to five (5) units (single containers) of the Coconut Oil Products without Proof of Purchase.

Class members who have their claims validated by the Claims Administrator will be reimbursed for each unit of the Coconut Oil Products purchase as follows:

The total amount of funds to be claimed by Class Members will be calculated based on the total number of people who file claims and will be adjusted up or down accordingly.

Win A Dog Person Hat From The Tito’s Giveaway!