You are here: Home / _Expired / Chipotle Delivery Fee Settlement, Claim with No Receipts!
May contain affiliate links. Read disclosure.. Offers were valid at the time of posting, but could expire at any time. All Pictures are for illustration purpose only. Actual product may vary.
Share Share Follow Share Follow View Email 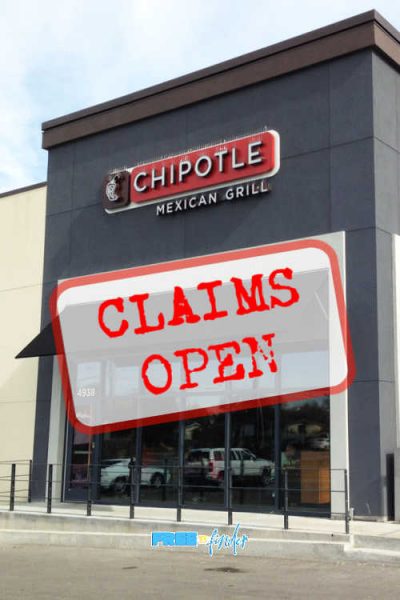 Overview hide
1 Chipotle Delivery Fee Settlement, Claim with No Receipts!
1.1 How do I file a claim?
1.2 What’s this settlement about?
1.3 Who is eligible for a refund?
1.4 Is a receipt required?
1.5 How much will I get back?
1.6 What’s the deadline to file a claim?
1.7 What is a class action lawsuit settlement?
1.8 Want more like this?
1.9 Don’t miss another freebie! Get Instant Freebie Alerts here! Find the Newest Freebies posts here! Then, JOIN all of our FB Groups!

If you purchased Chipotle via delivery in the timeframe indicated, then you may be entitled to part of the Chipotle Delivery Fee Settlement. Because, the lawsuit alleges that certain fees of Chipotles were misleading. The case is known as Aaron Aseltine and John Dundon v. Chipotle Mexican Grill, Inc., Settlement, Case No. RG21088118 (Superior Court of the State of California for the County of Alameda).

A Settlement has been reached in a class action lawsuit to resolve a lawsuit against Chipotle Mexican Grill, Inc. (“Chipotle” or “Defendant”), relating to allegations that Chipotle made false or misleading representations regarding its delivery fees, service fees, and menu prices on its delivery orders. Chipotle denies these allegations and asserts that all communications around its delivery orders were truthful, but has settled this case to avoid further litigation and distraction of resources from its business. By entering into the Settlement, Chipotle has not conceded the truth or validity of any of the claims against it.

Proof of purchase is not required. However, if you do not have a settlement id, you may contact them here.

Non-Rewards (those who are not part of Chipotle Rewards program) will receive a cash settlement from $1 million fund, divided by all claimants.

Chipotle Rewards Members will receive one free entrée from the Chipotle menu, from a $3 million fund. Retail value of vouchers is estimated at $8.50.