You are here: Home / _Expired / FREE Doritos Loco Taco at Taco Bell! (Steal a Base, Claim Now!)
May contain affiliate links. Read disclosure.. Offers were valid at the time of posting, but could expire at any time. All Pictures are for illustration purpose only. Actual product may vary.
Share Share Follow Share Follow View Email 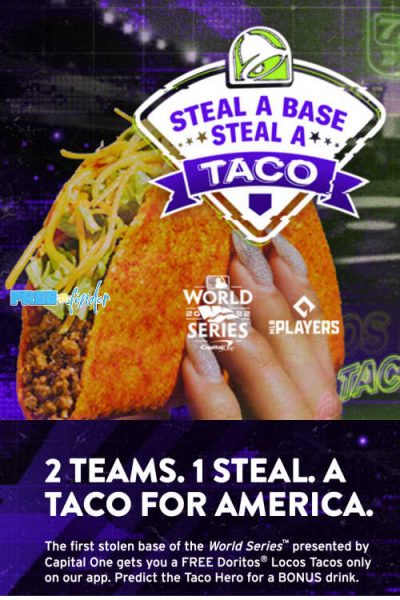 FREE Doritos Loco Taco at Taco Bell! (Steal a Base, Steal a Taco 2022)

Overview hide
1 FREE Doritos Loco Taco at Taco Bell! (Steal a Base, Steal a Taco 2022)
1.1 How it works
1.2 Don’t miss another freebie! Get Instant Freebie Alerts here! Find the Newest Freebies posted here! Then, JOIN all of our FB Groups!

Once again, Taco Bell is offering a free Doritos Loco taco in their Major League Baseball partnership called Steal a Base, Steal a Taco 2022! You’ll can also sign up ahead of time and predict the hero who steals the base to get an additional free drink! So, head on over now and make your predictions! Of course, this is for rewards members. So, if you’re not already sign up now.

If they have to steal a base, how can you claim “everyone gets a free taco?” What if they don’t steal a base? Well, it’s possible, but it hasn’t happened since 1989 (according to Wikipedia), and that is the only World Series to date in which neither team was credited with a stolen base. So, chances are very, very high. And, for a free taco, we’re betting on it.

The first stolen base of the World Series™ presented by Capital One gets you a FREE Doritos® Locos Tacos only on our app. Predict the Taco Hero for a BONUS drink.

Don’t forget, you can also join Taco Bell’s reward program and get a free Doritos Loco taco any time!