You are here: Home / _Featured / National Pie Day 2022 – Where to Get Free Dessert (1/23)
May contain affiliate links. Read disclosure.. Offers were valid at the time of posting, but could expire at any time. All Pictures are for illustration purpose only. Actual product may vary.
Share Share Follow Share Follow View Email 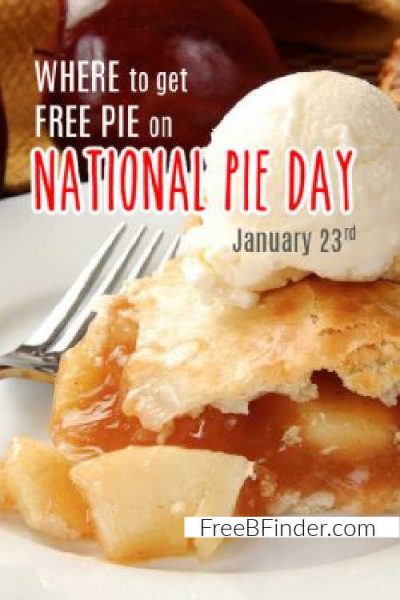 National Pie Day is January 23! If that’s not a reason to celebrate, I don’t know what is. Whether you love a hot fruit pie — fresh from the oven — or even meat pies, this is a day to celebrate and mark your calendar.

Where to get Free Pie on National Pie Day

Here’s our big list of restaurants that are giving away FREE or discounted pie to celebrate!

This list is being updated for 2022. Please check back as this holiday gets closer and offers are announced.

Get a free slice of pie every Wednesday with any entree and drink purchase any time between 10: am to close. Also, Get $2 off whole pies now through 1/23!

Stop in on Wednesday this week for a free slice of pie when you order Prime Rib. Black Angus Steakhouse has 32 locations in California, Arizona, New Mexico, Washington, and Hawaii. Join their Prime Club and get free dessert now, and a free steak dinner on your birthday.

In the past, Bob Evans has offered a Free slice of pie on National Pie Day! Nearly 500 locations in 18 states, primarily in the Midwest, mid-Atlantic, and Southeast regions of the United States.

Free slice of pie at Carrow’s with the purchase of regular priced entree or family meal every Wednesday with code FREEPIE. Sister restaurant to Coco’s and Shari’s, there are 5 Carrow’s locations in Southern California.

Free slice of pie at Coco’s with the purchase of regular priced entree or family meal every Wednesday with code FREEPIE. Sister restaurant to Carrow’s and Shari’s, there are 5 Carrow’s locations in Southern California. Locations in AZ and CA.

This farmer is in Mukwonago, WI, but you can use their locator to find retailers that sell Simply the Best near you.


Dedicated to the celebration pie, National Pie Day is the perfect opportunity to share simply the best pies with friends and family. Piled high with mounds of Ida Red Apples and covered with a sugar cookie-like top crust and flaky traditional bottom crust, National Pie Day is a great excuse to share and eat your favorite Apple Pie Baked in a Paper Bag.

To celebrate this special day of pie, all GT Pie Shops offer a free slice of Michigan fruit pie – Apple Crumb or Cherry Crumb pie with ANY purchase, on Saturday, Jan. 22. There are 15 locations throughout Michigan and Indiana.

For years, Norma’s Cafe has offered a free slice of Mile High pie on National Pie Day. There are 5 locations in the Dallas Ft. Worth Texas area.

Although O’Charley’s discontinued their FREE pie every Wednesday, they’re giving free pie with purchase on National Pie Day! There are over 200 locations across 17 states. Sign up for the O’Club rewards club for free food now and on your birthday.

In the past, they’ve offered a FREE slice of pie with entree purchase on National Pie Day. They are located in Commerce, Texas.

On Mondays from 11 a.m. to 9 p.m., stop by Perkins for a free slice of pie with entree purchase. Perkins is located in 32 states throughout the United States.

Polly’s Pies is celebrating all weekend! On 1/22 & 1/23 get a free slice of pie with any entree purchased. Additionally, they’ve given free slices of pie to Polly’s Perks e-club members. Polly’s Pies are located in Southern California.

In the past, My Red Lobster reward members were offered a free slice of pie or appetizer for National Pie Day. Sign up, and finger’s crossed they do it again! There are over 700 locations, nationwide. Be sure to sign up to also get free food on your birthday!

Snag free pie when you order their bottomless beverages! Red Robin has over 550 locations nationwide, in almost every state.

Shari’s offers one free slice of pie every Wednesday, from 4-10 p.m., with entree purchase. Just use the code “FREEPIE” to redeem. This offer is valid for dine-in, pickup and delivery.

Grab a free piece of pie Wednesday when you dine in. This offer is valid from 10am-10pm on Wednesdays. There are over 130 Village Inn locations nationwide, in 18 states, including Alaska, Arizona, Arkansas, Colorado, Florida, Illinois, Iowa, Kansas, Minnesota, Missouri, Nebraska, New Mexico, Oklahoma, Texas, Utah, Virginia, Washington, Wyoming and the territory of Guam.

Don’t miss all of our Birthday Freebies in our HUGE List of 500+ Free Birthday Gifts!

What is National Pie Day?

In the United States, January 23, is known as National Pie Day. Of course that’s not to be confused with Pi day, which is March 14. In other words, 3/14 – named after the infamous Pi, which most know is a mathematical term. In other words, π is the ratio of the circumference to diameter of a circle. According to National Geographic, it was first called “pi” in 1706 by [the Welsh mathematician] William Jones, because pi is the first letter in the Greek word perimitros, which means “perimeter.” But, what does that have to do with pie? Well, nothing. lol

National Pie Day began in the 1970s, according to Wikipedia. Created by Boulder, Colorado, nuclear engineer, brewer and teacher Charlie Papazian after he declared his own birthday, January 23, to be National Pie Day. I guess if you have that kind of power, you should use it for good.

But Really, What is Pie?

To most, this may seem like a no-brainer. Pie is a dessert that consists of a bottom crust, a middle filling, and often a top crust. However, some pies don’t have a top crust. For example, pumpkin pie, a thanksgiving staple, does not have a top crust. Conversely, apple pie does have a layer above the apple pie filling which forms a flaky cap.

Pie fillings vary a lot. You can fill a pie with almost any type of fruit. For example, you can use filling such as apple, cherry, strawberry, blackberry, blueberry, raspberry. Vegetables are less thought of in pies, except the famous pumpkin pie or rhubarb. There are also nut pies, like pecan, walnut and even mixed nuts. Finally, there are pies for the chocolate lover such as French silk pie (Mr. freeBfinder’s favorite!) and chocolate mousse pie. This list doesn’t even scratch the surface of all of the types of pies available. There are so many!

Meat pies aren’t typically given credit when thinking of pie, but the beloved chicken pot pie comes to mind. Mincemeat sounds like it contains meat, but doesn’t. According to Wikipedia, mince pie is a sweet pie of English origin, filled with a mixture of dried fruits and spices called “mincemeat”.

So, there you have it: everything you wanted to know about pie but were afraid to ask.

Free Coffee At White Castle Today Only! 10/1 Today only, 10/1, you can get a free small coffee at White ...
Read More
Links on this website may contain sponsored content. Offer was valid at the time of posting, but may be limited and could expire at any time. All trademarks belong to their respective owners. Not sponsored by, endorsed by, or affiliated with Facebook, Twitter, Instagram. Please make sure you review our privacy policy, terms of service and disclaimer before using the site. Wendy Larson is a participant in the Amazon Services LLC Associates Program, an affiliate advertising program designed to provide a means for sites to earn advertising fees by advertising and linking to amazon.com and affiliated sites.