You are here: Home / _Expired / Free Taco Bell Today: Steal a Base, Steal a Taco World Series
May contain affiliate links. Read disclosure.. Offers were valid at the time of posting, but could expire at any time. All Pictures are for illustration purpose only. Actual product may vary.
Share Share Follow Share Follow View Email 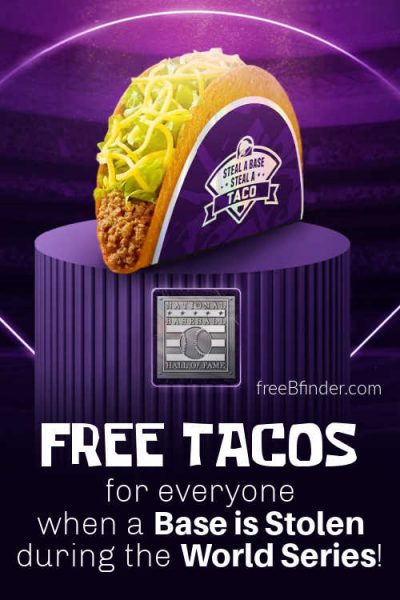 Everyone can score a free Seasoned Beef Nacho Cheese Doritos® Locos Tacos at Taco Bell when a base is stolen during the World Series!

The World Series begins Tuesday, October 26 live on FOX and is available for viewers to stream in 4K HDR through the FOX NOW and FOX Sports apps. Game Seven of the Fall Classic, if necessary, is scheduled for Wednesday, November 3.

The 2021 World Series is around the corner which can only mean one thing, free tacos are on the horizon for everyone in America thanks to the highly anticipated return of Taco Bell’s ‘Steal a Base, Steal a Taco.’* Taco Bell and MLB have continually celebrated the ‘Taco Heroes’ who have stolen the first base of the Fall Classic and scored free tacos for America, cultivating a loyal fanbase of baseball and taco enthusiasts who look forward to this unique experience each year. To commemorate its 10th year, Taco Bell is partnering with the National Baseball Hall of Fame and Museum to celebrate and cement its distinguished role in the rich history of America’s favorite pastime. The first base that is stolen during the 2021 Fall Classic will be headed to Cooperstown for display in the Museum, allowing the revered institution, which preserves the history of the game, to tell the story of Taco Bell’s Steal a Base Steal a Taco promotion and its popularity with fans.

Once the first base is stolen in the World Series, Taco Bell will celebrate America’s Taco Hero and give away a free Nacho Cheese Doritos® Locos Tacos for everyone in America, while supplies last, on a specified date that will be unveiled at a later time.

FREE Juice Beauty Moisturizer This post is to inform you ...
Read More

Free T-Shirt From The Fan Project!

Free T-Shirt From The Fan Project! Get signed up to ...
Read More