You are here: Home / News / Another Roundup Settlement! Claim Up to $137.50 With No Proof!
May contain affiliate links. Read disclosure.. Offers were valid at the time of posting, but could expire at any time. All Pictures are for illustration purpose only. Actual product may vary.
Share Share Follow Share Follow View Email 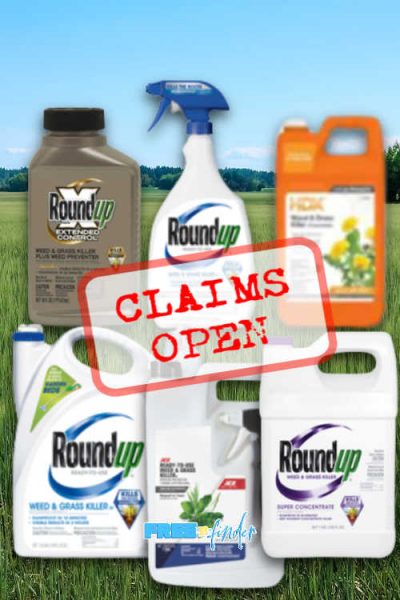 Overview hide
1 Roundup Settlement! Claim Up to $137.50 With No Proof!
1.1 How do I file a claim?
1.2 What’s this settlement about?
1.3 What Products are Included?
1.4 Who is eligible for a refund?
1.5 Is a receipt required?
1.6 How much will I get back?
1.7 What’s the deadline to file a claim?
1.8 What is a class action lawsuit settlement?
1.9 Want more like this?
1.10 Don’t miss another freebie! Get Instant Freebie Alerts here! Find the Newest Freebies posts here! Then, JOIN all of our FB Groups!

If you purchased Roundup or associated pesticides in the timeframe indicated, then you may be entitled to part of the Roundup Weed Killer Ad Settlement. There are nearly two dozen products included, however; for example, if a you purchased a 1.33 gal. container of Roundup® Ready to Use Max Control 365 in California at least once a year since 2015, the refund amount could be $56.00 without proof of purchase. Conversely, the amount available to claim for the 2.5 gal. HDX® Concentrate Weed & Grass Killer is $12.50 per unit (this product requires proof, but it’s just an example). And you can claim one unit per year without proof of purchase. So, if you were in New York and claim one unit per year since 2011 (the year class period begins in that state), the refund amount would be $137.50.

FYI –  the product with the highest anticipated payout per unit is 0.5 gal. (64 oz.) Roundup® Weed & Grass Killer Super Concentrate $15.00. Furthermore, this product does not require proof of purchase.

The lawsuit seeks to obtain compensation for alleged false advertising and breach of warranty. Plaintiffs argue that Defendant falsely advertised and promoted the Products by failing to disclose that the Products, and their active ingredient, glyphosate, could potentially cause cancer or other adverse health effects. If you purchased any of the Products during the Class Period for purposes other than resale or distribution, you are in the Class.

Monsanto denies Plaintiffs’ allegations and any wrongdoing and disputes the Class’s right to recover anything. Nevertheless, it has agreed to settle the lawsuit for the purpose of avoiding the time and expense of further litigation.

What Products are Included?

The “Products” are defined as: (see also, list of eligible products)

You are a member of the Class if you:

b. claiming more than 1 purchase a year per household for any of the other eligible Products during the eligible class period based on the state of purchase.

Class Members will be able to make claims for payments for the Roundup®, HDX®, and Ace® Products listed below, equivalent to approximately 20% of their weighted average retail price during the relevant class period. Payments per unit range from $0.50 to $33.00, depending on the price of the product(s) purchased, for between 2 and 11 units without proof of purchase, depending on the state of purchase. The amount available for each Product is shown in Appendix 1. With the exception of the three largest concentrated Products, claims can be made without proof of purchase, but such claims are limited to 1 unit per year within the Class Period.

Free Combo Meal at White Castle If you have a ...
Read More

Free RareEssence Stress Relief Roll-On Would you like to try ...
Read More
Go to mobile version