You are here: Home / _Expired / StubHub Class Action Settlement, Claim $20 with No Receipts!
May contain affiliate links. Read disclosure.. Offers were valid at the time of posting, but could expire at any time. All Pictures are for illustration purpose only. Actual product may vary.
Share Share Follow Share Follow View Email 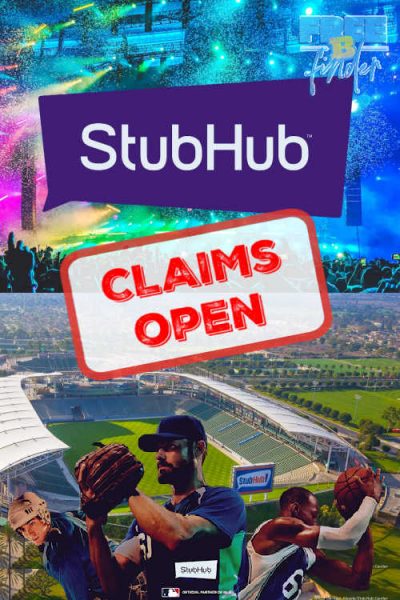 Overview hide
1 StubHub Class Action Settlement, Claim $20 with No Receipts!
1.1 How do I file a claim?
1.2 What’s this settlement about?
1.3 Who is eligible for a refund?
1.4 Is a receipt required?
1.5 How much will I get back?
1.6 What’s the deadline to file a claim?
1.7 What is a class action lawsuit settlement?
1.8 Want more like this?
1.9 Don’t miss another freebie! Get Instant Freebie Alerts here! Find the Newest Freebies posts here! Then, JOIN all of our FB Groups!

If you purchased tickets on StubHub as indicated, then you may be entitled to part of the StubHub Settlement. Because, this case alleges that StubHub’s method of displaying ticket fees charged to purchasers violated California consumer protection law. The court has not decided who is right; but, both parties have agreed to a settlement out of court. The case is known as Susan Wang and Rene’ Lee v. StubHub, Inc. Case No. GCG18564120 in the Superior Court of the State of California, County of San Francisco.

The lawsuit alleges that StubHub’s method of displaying ticket fees charged to purchasers violated California consumer protection laws. Specifically, the lawsuit alleges that displaying fees for the first time at the end of the purchase process (at checkout) was improper, and that StubHub should have disclosed that it profited from certain fees. The causes of action asserted in the complaint are for violations of California Business and Professions Code section 17500, violations of California Business and Professions Code section 17200, and violations of the California Consumers Legal Remedies Act, Civil Code section 1750. The complaint contains all of the allegations and claims asserted against StubHub and can be obtained from this Settlement Website, or by making a written request of the Settlement Administrator following the instructions in Question 21 below.

StubHub denies the allegations asserted in the Action and denies any wrongdoing or liability whatsoever. The proposed Settlement is not an admission of guilt or any wrongdoing by StubHub.

The Class includes all persons who between September 1, 2015 and September 1, 2019, (1) while in California, (2) purchased at least one ticket from StubHub, (3) using the StubHub website or mobile website. Consumers who bought tickets through StubHub’s mobile app are excluded from the Class.

Proof of purchase is not required. However, if you have receipts, you may be able to claim more. You will need to provide the email used to buy tickets.

If a Settlement Class Member chooses to submit a Credit Claim, the credit amount is estimated to range from $80 to $133 per Class Member who chose credit over a cash payment.

Free 8x10 Photo Enlargement at Walgreens Hurry and get a ...
Read More

How to Get *Almost* Anything Free! Start with My Free Book!

How to Get *Almost* Anything Free! Start with My Free ...
Read More