You are here: Home / Coupons / Printable Coupon / Super Bowl 2022 Freebies and Deals (2/13)
May contain affiliate links. Read disclosure.. Offers were valid at the time of posting, but could expire at any time. All Pictures are for illustration purpose only. Actual product may vary.
Share Share Follow Share Follow View Email 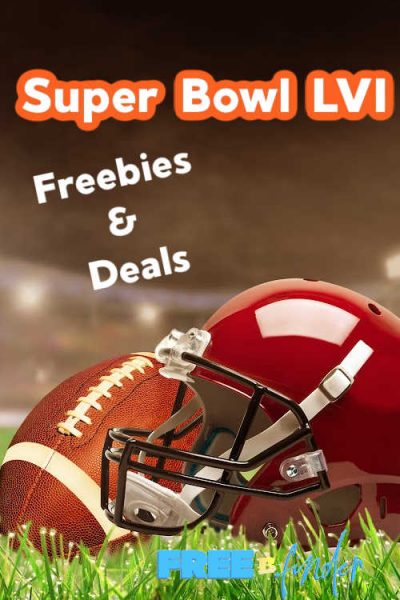 The Super Bowl is on February 13, 2022. Whether you’re a football fan or not, you’ll love the freebies you can score on behalf of the Super Bowl! This year it’s known as Super Bowl LVI, because it’s the 56th anniversary. This American football game decides the winner of the National Football League, or NFL. Also known as The Big Game, it’s the second most watched sporting event in the world (the most watched U.S. event). The Super Bowl is second only to the World Cup of Soccer, which is the most watched sporting event worldwide. So, whether you’re rooting for the LA Rams or the Cincinnati Bengals (or you just watch for the commercials or halftime show) you’ll want to check out our huge list of freebies and deals anyone can get!


We put together this roundup of all the free offers and special deals for the Super Bowl in 2022.

Get a free large pizza for Super Bowl Sunday when you order in the app! Some areas offer delivery for a small fee. 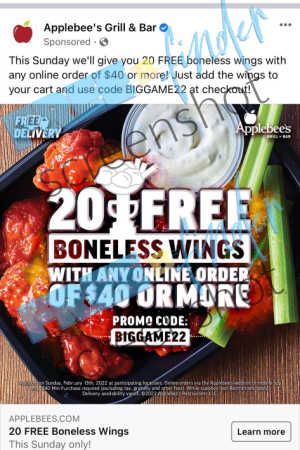 Buffalo Wild Wings is offering a free order of 6 Wings (regular or boneless) on February 13th, if the big game goes into overtime. They have over 1200 locations nationwide. Sign up for the Buffalo eClub to get free food on your birthday.

Get a free order a free side or topping of Queso Blanco when you use “QBLANCO” at checkout.  This chain Mexican restaurant is nationwide, with only 3 states that don’t have one: AK, HI, and RI.

El Pollo Loco Last year they offered free Fire-Grilled Chicken Nachos with purchase of any Family Meal on Big Game Sunday. We’re still waiting for them to announce this year! El Pollo Loco are located in Arizona, California, Nevada, Texas, Utah, and Louisiana. You can also join their rewards club to get free chips and guac just for signing up and get  free food on your birthday.

In 2021 they offered a free sausage biscuit at Hardees, if a Pick 6 happens. We’ll keep you posted on the 2022 offer! Hardee’s, fast-food chain restaurants are located predominantly in the Midwest, Mid-Atlantic, and Southeast; while their sibling chain, Carl’s Jr., is in the Southwest and Western U.S.

Last year, you could score a free two-topping pizza at Papa Johns for rewards members who spend at least $20 in a specific timeframe. Papa John’s can be found nationwide.

Wendy’s Hamburgers has a number of specials this weekend for the Super Bowl and Valentine’s Day Freebies!

Bertucci’s Restaurants has Game Day Takeout Deals! 2 Pizzas, salad, and rolls starting at $40.00. They have locations in the Northeastern United States.

Get the tailgate platter! This giant platter includes loaded potato skins, baked spinach and artichoke dip, crispy fried garlic pepper zucchini and chipotle buffalo chicken strips. This offer is available for takeout only and feeds about 6 people. There are 32 locations in California, Arizona, New Mexico, Washington, and Hawaii. Join their Prime Club and get free dessert now, and a free steak dinner on your birthday.

Last year they offered a 50-piece Chicken Supremes platter for $49.99 on Super Bowl Sunday at Bojangles. While you’re there, sign up for Bojangles birthday club for a free biscuit! Bojangles can be found in 14 U.S. states (Alabama, Arkansas, Florida, Georgia, Illinois, Kentucky, Maryland, Mississippi, North Carolina, Pennsylvania, South Carolina, Tennessee, Virginia and West Virginia) and the District of Columbia, with a planned expansion into Ohio. We’ll update once they announce the deal for this year!

Boston Market is offering a Baby Back Ribs Catering Bundle. This includes baby back ribs, mashed potatoes, gravy, steamed vegetables, fresh-baked cornbread, and your choice of 2-liter coca cola product or gallon of lemonade or iced tea for $179.99. The platter feeds 10 people. There are 340+ chain locations in 27 states and Puerto Rico.

DiGiorno will be giving out free pizza during the Super Bowl in the Digiorno Pi Score Sweepstakes! If at any point the score is 3-14 or 14-3 (Pi)  winners will receive a coupon for a free DiGiorno pizza! All you need to do is enter between February 6th and February 13th for a chance to win!

Hickory Tavern is offering $20 tickets to book a table for their Super Bowl Event. The tickets includes a buffet, contests, raffles, games, and more. You can order your tickets through Eventbrite. There are 24 different locations in North Carolina and South Carolina.

O’Charley’s in the past has offered chicken and ribs takeout specials on Super Bowl Sunday. We’re still waiting to see if they will offer any specials this year. There are over 200 OCharley’s locations across 17 states. Sign up for the O’Club rewards club for free food now and on your birthday.

This nationwide chain is offering two large sides, three large entrees for $29! $0 delivery on purchases of $10 or more! This offer is valid now through 2/15/22.

Red Lobster is offering free delivery to My Red Lobster Rewards members, so chek your email. There are over 700 locations, nationwide. Be sure to sign up to also get free food on your birthday and the rewards club for more offers!

In the past, they have offered coupons at Spaghetti Warehouse for game day. Nothing has been announced yet but we’ll update if they do! Spaghetti Warehouse has locations in OH, NY and TX. Be sure to sign up for their club, and get free food now and on your birthday.

Snag a 12-pack of tacos for $15.99 at Taco Bell locations nationwide. Choose between hard or soft shells or get 6 of each!

In 2021 they offered 20% off your dine-in check or takeout order on Super Bowl Sunday at Texas de Brazil. They have yet to say if they will do it again this year or not but definitely join the eclub to get $20 off. They have locations in 20 states across the U.S., and more worldwide.

Tijuana Flats is offering $15 off your next catering when you schedule wings catering package to pick up on 2/13/22. You must place your order by 2/12. They have locations in IN, VA, NC, and FL.

Get 25 mini corn dogs for just $5 on Super Bowl Sunday at Wienerschnitzel. Wienerschnitzel locations are found predominantly in California and Texas, with a few others in Arizona, Colorado, Illinois, Louisiana, New Mexico, Nevada, Utah, and Washington.

Free Sweetarts at Casey's General Store - Today Check out today's offer for the Celebrate the 24 Days of Casey's ...
Read More
Links on this website may contain sponsored content. Offer was valid at the time of posting, but may be limited and could expire at any time. All trademarks belong to their respective owners. Not sponsored by, endorsed by, or affiliated with Facebook, Twitter, Instagram. Please make sure you review our privacy policy, terms of service and disclaimer before using the site. Wendy Larson is a participant in the Amazon Services LLC Associates Program, an affiliate advertising program designed to provide a means for sites to earn advertising fees by advertising and linking to amazon.com and affiliated sites.

Free How to Crochet Granny Squares for Beginners on Amazon

Free How to Crochet Granny Squares for Beginners on Amazon ...
Read More

FREE Scalp Relief Kit! This post is to inform you ...
Read More

Free L'Oreal Paris Lipstick! This post is to inform you ...
Read More