You are here: Home / _Expired / TCL TV CA Class Action Settlement, Claim Up to $40 with No Receipts!
May contain affiliate links. Read disclosure.. Offers were valid at the time of posting, but could expire at any time. All Pictures are for illustration purpose only. Actual product may vary.
Share Share Follow Share Follow View Email 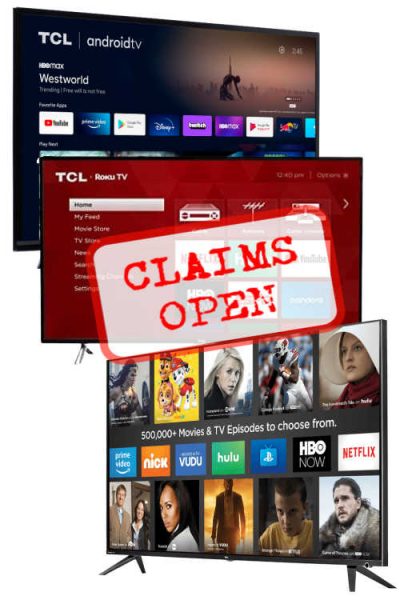 TCL TV CA Class Action Settlement, Claim Up to $40 with No Receipts!

Overview hide
1 TCL TV CA Class Action Settlement, Claim Up to $40 with No Receipts!
1.1 How do I file a claim?
1.2 What’s this settlement about?
1.3 What Products are Included? Where were they sold?
1.4 Who is eligible for a refund?
1.5 Is a receipt required?
1.6 How much will I get back?
1.7 What’s the deadline to file a claim?
1.8 What is a class action lawsuit settlement?
1.9 Want more like this?
1.10 Don’t miss another freebie! Get Instant Freebie Alerts here! Find the Newest Freebies posts here! Then, JOIN all of our FB Groups!

LAST CHANCE! If you purchased a TCL TV from April 2016 to December 2021, you may be entitled to receive up to $40 in this California class action settlement. The official website is maintained by the Settlement Administrator for Christopher Julian, et al. v. TTE Technology, Inc. dba TCL North America , Case No. 3:20-CV-02857 pending in the United States District Court for the Northern District of California.

All individuals who, from April 24, 2016 to December 31, 2021, purchased a new TCL television marketed as having a “Hz” rating twice as high as its native panel refresh rate (Hz) in the state of California.

The Settlement Awards are capped at $15 per valid Claim and subject to pro rata increase (totaling up to $40) or decrease, depending on the number of all approved Claims submitted.

Free 2023 Heart of the Nation Calendar with Free Shipping

EVERYONE Gets Free $5 for Quick Easy Survey (HURRY!)

Free Stationery Samples from The Knot with Free Shipping

Free Stationery Samples from The Knot with Free Shipping Are ...
Read More
Go to mobile version